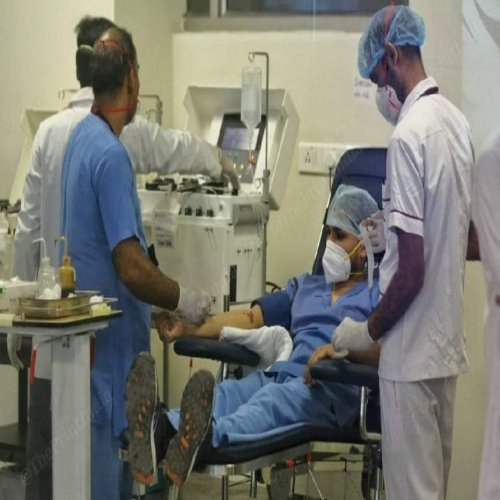 When Delhi Health Minister Satyendar Jain credits plasma therapy with his recovery from Covid-19, and reports of its success have been pouring in from around the country. Even as multiple trials remain underway to establish its efficacy against a disease that has battered the world, plasma banks have been set up to ease patients’ search for donors.

Social media is flooded with requests for plasma donors, and many high-profile recovered Covid-19 patients have either pledged or already donated their plasma for people still under treatment.

As countries around the world experiment with multiple treatments to tame the Covid beast, plasma therapy has been touted as a promising avenue for patients not responding to other lines of treatment. Late last month, the Uddhav Thackeray government in Maharashtra launched the world’s largest plasma therapy trial for severely-ill patients.

As of 6 July, there were 11 trials registered in India to test the efficacy of convalescent plasma therapy, with other hospitals carrying it out on an investigational, case-to-case basis.

But doctors at Delhi hospitals and other health experts have urged caution in taking instances of recovery at face value. They say the results of plasma therapy trials have been “encouraging”, but add that it is no magic bullet.

Experts say the kind of publicity being directed towards the therapy should have ideally waited until a conclusive study.

Questions have also been raised about the regulations, or the lack thereof, overseeing the administration of the therapy across different hospitals, with one expert pointing out that a lot seems to be happening “without adequate checks and balances”.

In India, the therapy was first explored on a Covid-19 patient in April by Max Healthcare in Delhi. The patient recovered.

On 13 June, the Ministry of Health and Family Welfare sanctioned the use of plasma therapy by hospitals “off-label”  , which means with unofficial approval, as an “investigational therapy” and only under certain conditions.

The guidelines make it clear that use of the therapy is “based on limited available evidence”.

The government has constantly maintained that convalescent plasma therapy remains experimental is not advised as a routine line of treatment. As things stand, the government only recommends it for patients with a moderate form of the disease.

“There is some evidence to suggest plasma therapy decreases the viral load and leads to a resolution where lung damage is concerned. But we don’t have enough data to call this a robust claim,” said Dr Anupam Sibal, group medical officer of Apollo Indraprastha.

“That’s precisely why we need more strictly monitored trials: One, so we can get more data, but also so we can access at what point administering the plasma is effective and when it isn’t,” he said.

#KhabarLive reached Dr V.G. Somani, the Drug Controller General of India (DCGI), multiple times through phone calls, text messages, and emails, but there was no response until the time of publishing this report.

Hospitals registered to conduct plasma therapy trials came up with their own study designs and timelines, which were then approved by the DCGI. The Clinical Trial Registry of India (CTRI) lists 11 different Covid-19 trials under “convalescent plasma” as on 6 July.

#KhabarLive reached some hospitals to learn more about the progress of the trials. Most doctors said it was too soon to arrive at a verdict, but claimed the response so far was “encouraging”.

Delhi’s Lok Nayak Jai Prakash Narayan Hospital, the country’s biggest Covid-19 facility, is in the thick of its second plasma therapy trial in collaboration with the Institute of Liver and Biliary Sciences (ILBS). The hospital is currently studying 400 patients, 200 of whom will be administered convalescent plasma at the moderate stage of their illness.

“We applied for a second pilot after we saw improvements in the first one. The first trial involved only 20 patients, so this time we wanted a bigger pool. Out of 200, 15 have been given the therapy and they have responded very well,” said Dr Suresh Kumar, medical superintendent.

Improvements are measured through oxygen saturation levels and other parameters.

Dr B.L. Sherwal, medical director of Rajiv Gandhi Super Specialty Hospital, Delhi, said donor immunity was a key component of the treatment: “It’s important to check the antibody level of the donor or else it won’t have any impact on the person receiving the plasma,” he told #KhabarLive.

“If you pick your patients correctly based on blood tests and certain clinical parameters, and at the right stage of the disease, there is a good chance of plasma therapy being successful,” said Dr Om Srivastava, director of infectious diseases at Jaslok Hospital, Mumbai, adding that the success rate for moderate to severe patients has been “almost 100 per cent”.

But some doctors are wary.

Dr Rajesh Chawla of Apollo Indraprastha, which is running a trial on 100 patients, said it was important to be measured.

“None of the studies has shown it’s effective. It’s presumed to be effective. Lots of people are getting better without it, and it’s far too early to tell right now. It should only be given with due precaution,” he said.

“It is too soon to jump to any conclusions. While three of four patients have recovered and been discharged, one patient passed away,” said Dr N.N. Mathur, medical director of Lady Hardinge in New Delhi, which is part of the ICMR’s country-wide PLACID trial that started in April.

Talking to #KhabarLive, Dr Aparna Mukherjee, a scientist at the Indian Council for Medical Research (ICMR), said two-third of the sample size of the all-India plasma trial, which includes 452 subjects, had been completed.

Asked when the results are likely, she said “in a couple of weeks”. “Usually it takes much longer, especially since it’s being conducted across the country and we don’t want to give out an unclear message,” she added.

While some hospitals are carrying out the treatment as part of clinical trials registered with the government, others are offering the service “off-label”. In both cases, experts said, the government should ensure better regulation to get a clear understanding of how effective the therapy is actually proving, and under what conditions.

Any hospital or doctor using it on a patient can do so expressly for the purpose of a trial and with the approval of the hospital ethics committee.

Plasma therapy is free of cost if conducted under a clinical trial. However, it costs between Rs 11,000-20,000 if done on a case-to-case basis.

Amar Jesani, a medical doctor and bioethics and public health expert, said, “Since the government has allowed hospitals to conduct therapy even without any conclusive result of the clinical trial of plasma donation, we are seeing a business model in this too.”

Criticising the political “propaganda” behind advertising such initiatives, Jesani said it’s become a matter of one-upmanship as to which party will arrange more donors instead of dealing with it in a scientific manner.

“It is similar to what happened with hydroxychloroquine trials,” said Jesani, who serves as editor of the Indian Journal of Medical Ethics.

At Max Healthcare, for example, patients are being charged even though, according to the Clinical Trial Registry of India, the facility has a trial underway.

“As a part of ongoing clinical trials under the approval of DCGI, Max Healthcare has enrolled 50 patients under the treatment arm,” Max said in a statement to #KhabarLive.

Dr Sandip Budhiraja, group medical director of Max Healthcare, said patients are being charged Rs 11,000 for a unit of plasma, including “donor screening for platelets and plasma processing”.

Asked why they were charging patients during an active clinical trial, Dr Budhiraja added in a subsequent interview, “Our trials are over. Patients who were part of the trial knew about it and were not charged for the treatment. Patients coming into the hospital now are being charged.”

When asked, Max did not disclose the date the trial came to an end.

Other hospitals in the capital charge comparable fees for the treatment — for example, Fortis Hospital charges Rs 20,000 and B.L. Kapoor Hospital, Rs 11,000, to provide the treatment “off-label” and on “compassionate grounds”.

Dr Rajesh Pande, director of the ICU at B.L. Kapoor Hospital, said they were initially providing the therapy free of cost, but added that the machines extracting plasma are expensive to use. “What we are charging is nominal, since the machines are so expensive and the procedure requires the entire staff present and alert,” he said.

“We wanted to do the trial initially. But from what I have heard, one of our sister concern hospitals said that the data set observed by them didn’t show encouraging results, which is why we decided to drop out and offer the therapy on a compassionate, off-label basis,” Pande added.

Dr Anant Bhan, a researcher in global health, bioethics and health policy, said much of the air needed to be cleared when it comes to the regulation of plasma therapy.

“It is still experimental in nature, and this needs to be reinforced at all levels. With regards to the setting up of a plasma bank or a plasma campaign, it might have been appropriate to wait for the study results to come out before this kind of a wide promotion was done,” he added.

He said study oversight is crucial and trials conducted should be monitored and reported in timely fashion. The absence of a public repository of information also complicates matters, he added.

“Whether a hospital is part of an ICMR trial or doing one of its own, it should be all regulated and information on the studies be available transparently ideally on the same platform (such as CTRI) as a lot seems to be happening without adequate checks and balances.” #KhabarLive #hydnews

Announcing a specification for PHP

Street Hawkers At Charminar Stretch Struggling For Livelihood In Hyderabad |...