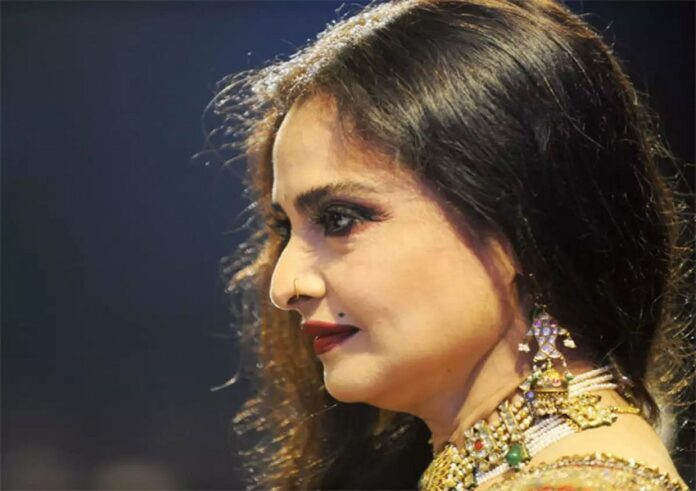 An actor with charisma and mystery – Bhanurekha Ganesan, the daughter of the Tamil matinee Idol Gemini Ganesan (he never acknowledged her) and popular Telugu actress Pushpavalli who dreamt of becoming an air hostess or a nun appeared as a child actor in a Telugu film Inti Guttu in 1958 when she was barely 9 years old. She debuted as a heroine in a Kannada film Jackpot Nalli CID 909 opposite Raj Kumar in 1969. 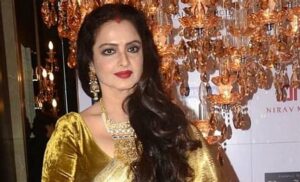 Her first Bollywood film Anjana Safar (1969) with Biswajit when she was 15 year old featured a 4 minute long kissing scene which made it to the Asian edition of the famous Life magazine; she claimed in interviews to have been tricked into doing it. This film was eventually released as Do Shikaari, almost a decade later, and sank without a ripple.

Ever since, controversies seem to have followed her fifty year long film career in which she has acted in around 200 films. Her first Hindi film: Sawan Bhadon with Navin Ninschol (1970) was a success with several hit songs. Her Raampur Ka Lakshman with Randhir Kapoor (1972), Kahani Kismat Ki with Dharmendra(1973), and Pran Jaye Par Vachan Na Jaye with Sunil Dutt (1974) which focused more on her cleavage and thunder thighs and less on her talent catapulted her as a bankable actor of the early 1970s.

Today’s ultimate Bollywood Diva Rekha- fair, slim & trim-considered an embodiment of nafasat, nazakat, tehzib and adas wasn’t always like this; it has been the result of her painstaking and determined efforts over several years.

Initially, she was, dark, dusky and plump with Tamilian features who was ridiculed by a sexist society as an ugly duckling with a garish dress sense. Apparently, the hurt of constant humiliation motivated her to prove all her detractors wrong. Strict diet control, rigorous regime of exercises and yoga, a disciplined life style and treatment for lightening the colour of her skin facilitated her transformation.

She also learnt the art of makeup and acquired an impeccable dress sense.Red lipstick, dark flowing geshus , red sindoor,bangles on her arms and kanjeevaram sarees became her fashion statement and today she carries an unmistakable aura which makes heads turn even now when she is past 65. 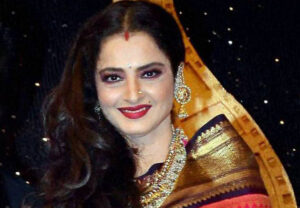 Many believe that Rekha’s physical appearance and performances began to improve with her first film with Amitabh Bachchan Do Anjane ,a crime thriller, in 1976. But it was with the film Ghar (1978) with Vinod Mehra whom she was rumoured to have married secretly (she has denied this rumour in her interview with Simi Grewal),directed by Manick Chatterjee that Rekha was taken seriously as an actress. Her sensitive, calm and nuanced portrayal of a happily married woman whose life is suddenly devastated by a rape brought her a nomination for Filmfare’s Best actress award.

The same year came Amitabh Bachchan,Vinod Khanna,Rakhee starrer block buster Muqaddar Ka Sikandar which offered an author backed role for Bachchan. But Rekha as the nautch girl, Zohra, stole the thunder under his nose with her bewitching adas and oomph. Her song Salam e Ishq and the last scene when Zohra dies in the arms of her lover remain etched in the mind of viewers. In many ways, Zohra was the precursor of Umrao Jaan in Rekha’s film career.

In Amitabh’s box office hit Natwarlal Natwarlal(1979), a sure masla cocktail of action, comedy and romance. In Hrikesh Mukherjee’s Khoobsoorat (1980, dialogues by Gulzar),Rekha as Manjari Dayal ,with two pony tails appears in a totally new avatar- chirpy.chatty,naughty,vivacious and vibrant who tries to make everyone happy. She reminds of Rajesh Khanna’s role in Hrikesh Da’s film -Bawarchi with Jaya Bachchan. For her natural and effortless portrayal, Rekha won her first Fimfare’s best actress award that year.

1981 marked the peak of Rekha’s ascendancy as an actress and a star who could carry an entire film on her shoulders and hold her own against the best male protagonists of her time. She was featured in Muzaffar Ali’s Umrao Jaan based on famous Urdu novel Umrao Jaan Ada written in 1905 by Mirza Hadi Ruswa with stalwarts like Naseeruddin Shah and Farooq Shaikh. As well as in Yash Chopra’s Silsila, an intense love triangle featuring Rekha,Amitabh, Jaya Bachchan , Shashi Kapoor and Sanjeev Kumar which had shades of rumoured real life extra marital relations.

As Umrao, donning the most embellished and fascinating dresses of that period, speaking dialogues in chaste Urdu, conveying the turmoil within through delicate gestures, facial expressions, particularly her eyes and unforgettable ghazals sung by Asha Bhosale under the baton of Khayyam, Rekha won the hearts of millions of filmgoers who felt none could have been better than Rekha as Umrao Jaan. 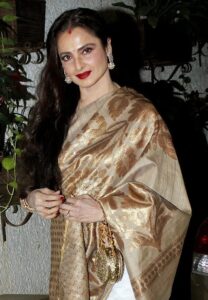 It was tough for Rekha to get under the skin of Umrao Jaan, she lived every inch the character she was portraying and convincingly conveyed her longing, craving, melancholy, sadness and loneliness of heart amidst the dazzling trappings & surroundings of the top courtesan .

The credit for creating this classic goes as much to Rekha, she mastered Urdu and picked up the minutest mannerism and nuances of a courtesan as to its Director Muzaffar Ali ,music director and the ghazals -Dil Cheez kya hai Aap meri jaan lijiye and Yeh kaun sa muqaam hai – all gems for ghazal lovers.

No wonder,Rekha won the national award for best acting though Shashi Kapoor felt it should have gone to his wife, Jennifer Kendal for 36 Chowringhee Lane.

Rekha looked gorgeously beautiful ,oozing with sex appeal while portraying the role of Woh, in Pati ,Patni aur Woh kind of love triangle. At a time when gossip columns were full of their off screen romance,it was a coup of sorts for Yash Chopra to persuade Jaya to join Amitabh and Rekha whose body language and chemistry was electrifying and infectious. 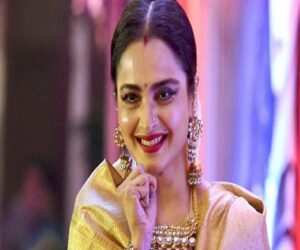 While scaling enviable heights in mainstream cinema,Rekha also lent support to the parallel cinema by doing several films which offered her opportunities to reinvent and explore new vistas of her acting talent. It was an acknowledgement of her metamorphosis as an actress that Shashi Kapoor who once wondered how this dark and plump actress could ever be a successful star himself signed her for two of his films Kaliyug(1981) a modern interpretation of Mahabharata directed by Shyam Benegal in which she was featured as Supriya based on the character of Draupadi and Utsav,the Little Clay Cart, based on a 2nd Century BC Sanskrit play. And again in Mricchakatika by Sudraka directed by Girish Karnad.

In Kaliyug, Rekha acquitted herself well in the face of several celebrated actors. In Utsav, dressed as Vasant Sena , the courtesan, Rekha exudes sensuality and eroticism. Though, these films got applause and kudos from connoisseurs of Parallel cinema, they proved a disaster at the Box Office; Shashi Kapoor never recovered from his debts.

Gulzar’s Ijaazat (1987) based on a Bengali story Jatugriha by Subodh Ghosh) which featured Rekha and Naseeruddin Shah as a separated couple who accidentally meet each other at a Railway station after many years and traverse on a nostalgic trip on the memory lane was marked by superb understated performances by both; it’s song Mera kuchh saman was a hit.

In Raj Kumar Santoshi’s Lajja (2001) a saga of women’s exploitation featuring Jackie Shroff,Anil Kapoor,Madhuri Dixit,Manisha Koirala ,Gulshan Grover and Danny Denzongpa, Rekha as Ram Dulari, the midwife, who protects women from exploitation, is brutally raped and eventually burnt alive by the powerful local leaders .Today when rapes are on the rise, this film sounds so contemporary. Though deglamorized, Rekha gave a moving and restrained performance.

The film which proved a watershed in her career and, in her own words, made her realize the depths of her histrionics capabilities was Khoon Bhari Maang(1988),a crime thriller directed by Rakesh which allegedly bore a resemblance to the Australian mini tv series Return to Eden . 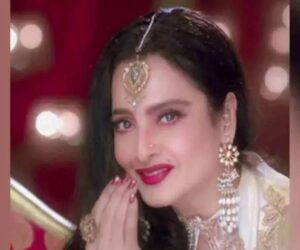 Rekha played a double role, one of a quiet, and trusting wife whom her husband (Kabir Bedi) conspires to kill to inherit her wealth and the other of a resolute, vengeful high society woman out to take revenge on her tormentors. For her superb portrayal of two contrasting characters, she won her second Filmfare award for best acting.

Underlining her courage to take risks and explore unconventional roles, Rekha appeared in Khiladiyon Ka Khiladi (1996) against a much younger Akshay Kumar and carried off the vampish role with aplomb. The much talked about mud wrestling scene with Akshay was supposedly her suggestion. For her unconventional role in this film,Rekha got Filmfare’s best supporting actress award.

Rekha has never shied away from doing what she wanted to do for fear of attracting criticism or controversies. Her decision to do Meira Nair’s Kamasutra, a tale of love proves this point. According to Nair the film was about love and eroticism that’s in the spirit of poets of the sensual like Bihari and Jaidev. Of Rekha, she said,” her character is very Zen. Her beauty, to my mind was fresh flowers, dark hair, and earth colours, Jamini Roy face.”Like Marylyn Monroe is shorthand for sex, Rekha is short hand for charisma.”

Her role as Mansi in Aastha (1997), with Om Puri, Dinesh Thakur and Navin Nischol directed by Basu Bhatatcharya of Teesri Kasam and Avishkaar fame unfolds the story of a happily married woman who is drawn to prostitution to fulfil her fantasies. Though Rekha was applauded for her courageous portrayal, the film bombed at the box office and she lost many of her fans.

In the twilight of her career, she received kudos for her brief guest appearance in the song “Kaisi Paheli Zindagani”, in Pradeep Sarkar’s Parineeta and as Hrithik Roshan’s mom in Krrish. 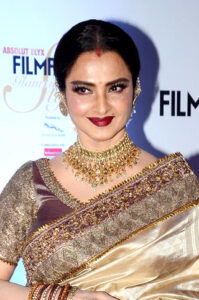 After reaching her peak, Rekha chose to be reclusive, attended very few parties and kept the media at arm’s length.This reclusiveness, hot gossip about her off screen romance with Amitabh Bachchan and linking of her name with her other co-stars, her short lived marriage with Mukesh Agarwal ending with his sudden suicide created a thick fog of mystery around her which she chose not to dispel. Not surprisingly, some film critics have likened her to Greta Garbo and Cleopatra.

In her interview on Rendezvous with Simi, she admitted having been in love with Amitabh: “duniya bhar ka love aap le lijiyega and add some more -I feel that for that person…He was something I had never seen before.I have never met anyone like him.” But she adds a pinch of mystery, “there was never a personal connection with him, that’s the truth.”

Renowned film director Shyam Benegal quips,”Rekha is a question mark, an exclamation mark, a coma, never a full stop! To know her is to be seduced by life.”

In an interview with #KhabarLive, Rekha weaves a shroud of mystery, “He is totally oblivious of what I feel for him. He has always been and will always be”. It sounds like Karan Johar’s “Ishq wala love”!

It’s a pity; Amitabh and Rekha who enjoyed fabulous on screen chemistry haven’t worked together after Silsila.

Rekha, one of the finest actresses of her generation, was honoured with a Padma Sri in 2010 and IIFA life time outstanding achievement award in 2012.She has also been a nominated Member of the Parliament. #KhabarLive #hydnews

Here are more details about Allu Arjun starrer Pushpa and its...

During 14.5 hour meet of military commanders, India tells China to...